I (Manda) come from Guernsey and when I go back I want to go sea swimming but the lack of company always stops me, so this time I decided to try and engage local groups to see if they would let me tag along and I wasn’t disappointed.  Katie and Brian then joined me for part of the trip, so they were dragged along for some of these adventures!

Our trip also coincided with 30 bays in 30 days, so we tried to tick off a few of these along the way.

I was working in my Guernsey office for a couple of days, so when I saw on the “Guernsey Open water swimmers” (GOWS) page that they were meeting for a lunchtime swim,  I headed on down.  The plan was a mile loop of Havelet Bay, which is situated at the south end of St Peter Port and has the impressive Castle Cornet overlooking it.  Fortunately there were 2 other people not wearing wetsuits so I decided to join them and I was pleasantly surprised at the temperature.  We did  a loop of the bay but regrouped at every buoy so no one was dropped and also ensured that me, without my contact lenses, didn’t end up in France.  Being able to swim at lunchtime was a dream come true and to be able to do it in such beautiful surroundings was even better. 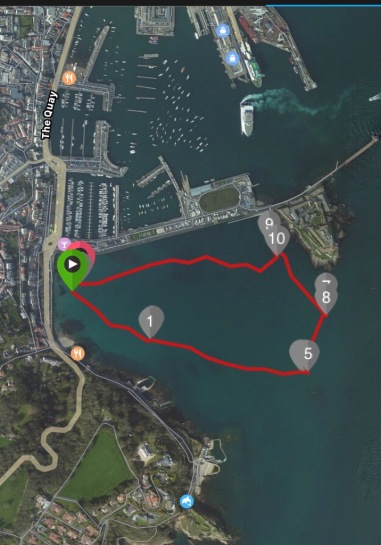 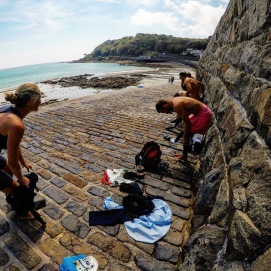 One of my colleagues in the Guernsey office was joining a group swim on Wednesday and invited me along.  We were meant to be in Jersey on the Wednesday but fog ended that, so last minute (which you can do when the beach is 2 minutes away) I decided to head on down with support crew of husband and baby to make the most of the day.  Laura from Try a Tri had set up a triangular course for swimming around so that everyone would stick together.  This was great for me and allowed me to gain some confidence in the sea that had been lost since Majorca 2015!

I got recommended this bay by the organisers of 30 bays, so we googled and decided “why not?”.  Why not… well we have a 1 year old and marble bay is accessible by only a coastal cliff path but after parking at Jerbourg point, we headed towards marble bay.  After a beautiful walk with views of Herm and Sark, we arrived at marble bay to find no one there.  We took it in turns to swim and just generally hung around living our own private beach dreams until I started dreaming of my cold drink that I had left in the car and the Guernsey ice cream at the Jerbourg kiosk.  We were there at low tide and apparently it is even better at high tide, so another reason to head back. 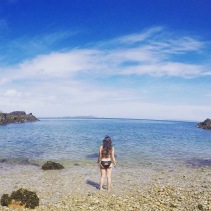 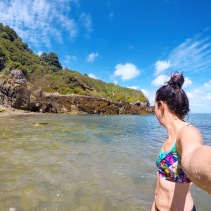 6:30 Friday am, I am normally at ironmonger row baths, so I just relocated my session to Guernsey with Swim Smooth CI.  I swam in the fast lane with 2 chaps and bashed out some 400s and then some 200s.  It was a great pacing set, and as the co-queen of pacing, I managed to hit the target times with accuracy.

On Wednesday night at Pembroke, I accosted a man in the sea, as you do.  He was swimming back from a swim as I was doing my laps with try a tri.  I asked if they were doing other swims that week that we could come along to and he said they were swimming Friday night at 6:15 at Lancresse, so enthusiastically I told Brian and Katie when they arrived in Guernsey.  We then tentatively turned up then to find a massive group of swimmers.   After some discussion we headed out to the edge of the bay, which was turbulent!  At which point Katie declared “I am concerned we aren’t going to make it back”.  We did! But it took us 18 minutes to get back vs the 10 minutes to get out. 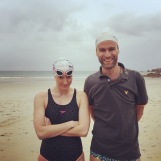 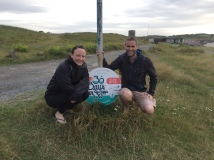 We wanted to get across to Herm but the weather forecast wasn’t great but we thought we would head over and see what the weather brought.  We boarded the boat dry and then arrived in Herm 20 minutes later to torrential rain.  We decided to go for a drink under cover and assess our options.  The rain didn’t let up and thunder and lightning started, so we decided we had best get the next boat back.  Brian wasn’t happy about the lack of swimming, so seeing water was just 10 metres away he decided to go for it.  Armed with my camera and my water proof coat I led him to the shore and off he went.  I was and still am very jealous!! 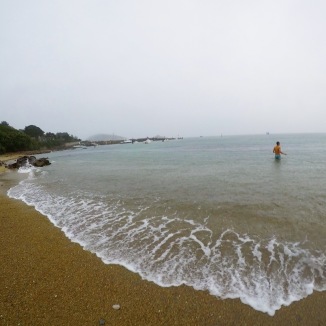 During lunch, we discussed afternoon plan, but it was still chucking it down so after seeking advice for a swim location on the GOWS facebook page we headed down to Saints bay. We were greeted by the swimmers we had swum with on Friday night and promised them we weren’t stalking them.  They had just finished so handed out some advice on where to head … “head for the lion and seal” – ya what?!  There is no parking at the beach so we parked by a slippery slope which we had to descend to get into the water – this turned out to be the hardest part of the swim.

The swim we had come for.  The morning of the swim we were greeted with wind and lots of it, which prompted the organisers to say they had already decided on a revised route and would decide 15 minutes before swim start whether it would go ahead.  After descending 324 steps we arrived with shaky legs and surprise to see some chunky waves. Jacqui, from Guernsey swim adventures, said we were going to do the revised route to cradle rock and back twice through. A tide going out and a gap in the weather meant that 10 minutes to go, we were reverting to plan A. Ahhhh I had no idea what that was as I thought we were doing Plan B. So after several minutes of repeating, cradle rock, rock in ocean, buoy, cradle rock, home, to myself and Jacqui ensuring us that there was a rock in front of the headland we were off.

I optimistically galloped off into the waves as only an islander or an Irish man (Brian) can do, to find my goggles knocked off (same for Brian).  Katie sensibly and cautiously walked into the water as only a proper English lady should do. We then plodded our way around the course.

We returned to shore to be greeted with rain and our winning gold caps! 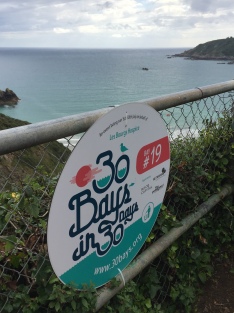 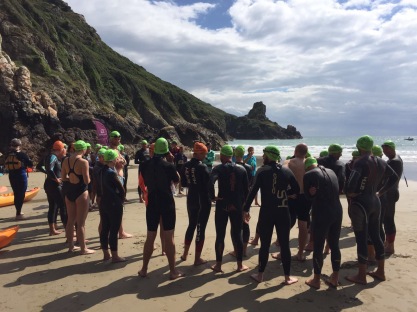 Wil, who I had met at the previous Tuesday’s swim, suggested one final joint swim from Havelet bay, via bathing pools to soldiers bay. This bay is no longer accessible by land due to falling rocks but has a great history as it is where Victor Hugo used to swim.

I arrived late at the bay (due to wedding ring removal issues) to see people swimming off but Wil still there. ‘No problem we will catch them’ errrr ok. He proceeded to speed off and I spent the next 10 minutes sprinting after him (I might have put more effort into this swim than the race on Sunday!). When we got to the bathing pools, we hopped the railings and swam through the pool that was like a wave machine. Rounded the headland corner and finally caught up with the others. Wil then disappeared off into the gullies and the others headed for home. I floated in the ocean for a while hoping he would eventually reappear. He didn’t so I decided to head back. On way back I stopped at bathing pools again and then he appeared. After a somersault off the diving board, we battled our way through the pool and then back to shore. 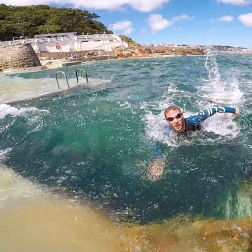 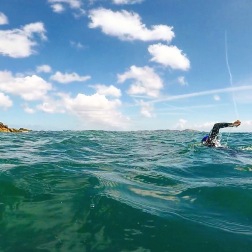 A lovely sunny swim to finish off what has been an amazing and confidence building sea swimming trip. 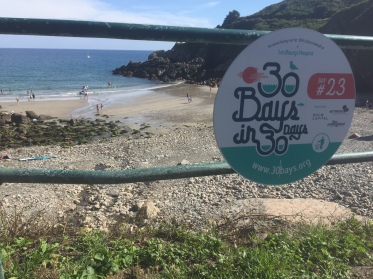 Thanks to everyone who welcomed me/us to their swims.

If you are ever in Guernsey and want to join some friendly locals for a swim here are some resource ideas:

Apart from accosting scantily clad men in the sea, I am not too sure how to find out about these swims to be honest. However, contact us at hello@teammermaids.com and we can point you towards the social media for some members.