I’ve (Manda) just got back from Mallorca, where I went to take part in the annual Sa Dragonera race hosted by Neda el Mon. Kate, Brian, Pivo and Charlie (who we know from Tuesday night swimming amongst other things) joined me on the trip, whilst Katie, unfortunately for me, was busy at home. 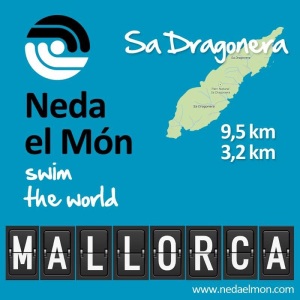 The race is a 9.5km swim around the island of Dragonera, which is just off the south west coast of Mallorca. Charlie had originally suggested going to us in December after she heard great things about it from other swimmers. The other 4 of us, buoyed by our recent Coniston adventure, signed up. Now a confession: Despite growing up metres away from the sea, I am petrified of seaweed, putting my feet on the floor in the sea and jellyfish (even more so than the east river monster). I agreed to this swim but I knew before I even signed up that this would be more a mental than physical challenge for me with these fears.

May came around, the water was heating up in London and before we knew it we were on a plane to Mallorca on a Friday night after work. On the Saturday morning after only a few hours sleep due to a late arrival (Thunderstorm in London) and the worst rent a car company (Enterprise – please never use them) we went for a beautiful swim in Sant Elm, where we were basing ourselves for the weekend. We then headed to Cala Fonoll near Port Andratx for a bit of r&r on the beach and another paddle with a bit of synchronised swimming (because we know how much I love synchro!!) thrown in before making our way over to the race briefing. 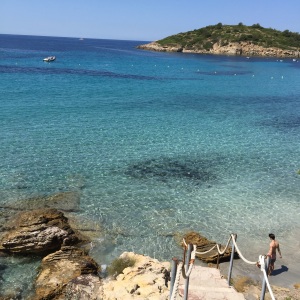 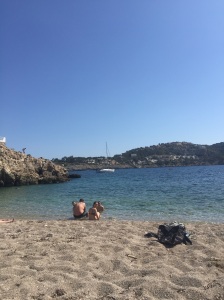 The briefing was in Spanish so it was time to cash in on that Spanish degree and step up and volunteer to listen. At the briefing they mentioned the 2 main risks being cold and jellyfish. Now as a Brit I knew the cold wouldn’t be an issue for us hardy lot (especially as I am the only one out of this group that hasn’t been involved in some kind of Channel Swim) but the jellyfish were suddenly a possibility.

On the Sunday we met at the port for 7am and boarded one of many boats that were ferrying swimmers over to the island and then we arrived at the island to find the harbour full of jellyfish. 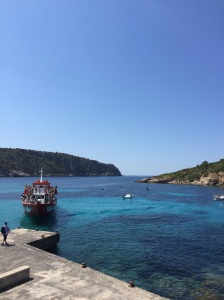 The organisers then did an additional briefing in Spanish but we (I) didn’t listen as we thought it was a repeat of the one the previous night. Shortly afterwards some lovely German lady told us they had announced that we wouldn’t be doing a full loop of the island. Instead we would go half way and turn back to ensure we covered the same distance. The reason for this change was JELLYFISH.. 1000s of them at the northern part of the island and there was no way we could swim through them. I had mixed emotions about this as I was relieved they were not making us swim through 1000s of them and they were ensuring we swam the full distance.. But concerned that there might be 100s over the rest of the swim.

So at 9am we casually got in. Even though we were swimming in the ‘competitive’ wave I was in no rush to get in and join the chaos, so held back and swam easy to the corner of the port, had a short chat with Brian and then off we set… Immediately into loads of jellyfish. 100s, 1000s I don’t know, but they were everywhere. My nightmare became a reality. Then after 2 minutes I got stung. Waaaah. I calmed myself down and plodded on weaving my way through the jellies. You couldn’t draft as that would potentially mean not seeing a jelly approach you, so Brian and I swam side by side.

After about 20 minutes Brian stopped promptly.. Turning on his back, he declared ‘I’ve been stung on my nose’.. His flipping nose. The pain in my hand suddenly seemed insignificant and I had a new worst nightmare. We then concluded our chat about his stung nose with:

Brian: ‘well what can I do?’
me: ‘put your hand up’
(open water swimming code for support vehicles to get you out of water)
Brian: ‘no let’s carry on’

I was gutted. I had seen a way out of this jellyfish soup but he was too hardcore to stop and there was no way I was carrying on without him.. Note to self: stop hanging around with hardcore people. If you would have got out in such situations, please get in contact, you can be my friend as I have had to bin Brian (and Katie – she would have carried on as well!)

We rounded the bottom of the island where it was a lot choppier but jelly free and then ploughed down the other side to the turning buoy in 1:15. I was happy that we were now half way there but was aware that we had to swim back through the 2 mile section now known as jelly soup before we would be home.

The chop increased and had the added bonus of rolling waves, which meant at points it felt like we weren’t even moving. I seriously considered letting my frustration out with a roll onto my back and a shout of ‘you’ve won sea YOU’VE WON’.. dramatic, moi?

Once we were back in the jelly soup we swam slowly and cautiously, weaving our way through the small empty gaps hoping to not get stung again (we did!)

The finishing point was the final challenge as the jellyfish had got trapped in the harbour where we were finishing and I seemed to be one of the only swimmers who didn’t get stung in this section (Charlie took a sting to the face 5 metres from the end). After 2:40 I was back on dry land.. I actually face planted dry land… But doing things stylishly is never my strong point.

At this point the German lady, who had told us of the change of course, told us that swimmers had got out post the start of the race due to the conditions. Suddenly I felt better and me and Brian, with his stung and swollen nose, high fived and said a little “go us”. Suddenly I was super proud of myself (and the others) for having finished. Gone was the emotional fatigue and the small disappointment over the speed/time. I had met my demons head on, literally, and hadn’t got out, despite wanting to. A certain Canadian sportswear brand says do one thing a day that scares you and quite frankly I think I’ve done enough for one year thanks.

The others came in triumphant having finished. Tales of stings started and some even resembled the shape of the stingers, which I know will be boasted about for years to come. 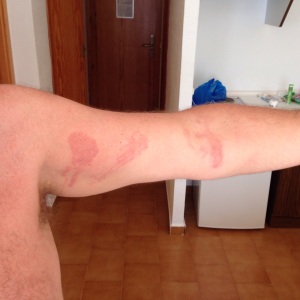 Whilst watching and cheering the other swimmers come in there was suddenly an “amandared” being called to the podium. I had only gone and won the female race. 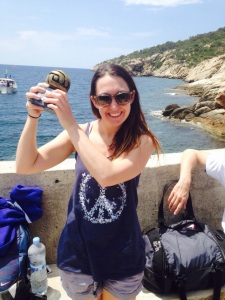 We made our way back to the Mallorca and then Neda El Mon put on a feast of pica pica, paella and donuts for lunch (€17pp). After a dip back in Sant Elm’s bay (we are obsessed and with the water as beautiful as it is in Mallorca we needed to make the most of it) we debriefed over aperol spritz and more food before getting a well-earned night’s sleep.

Sunday morning we went for a recovery swim to a smaller island off Sant Elm… we can’t help it, sorry, before heading to Cala Illetas to chill out on the beach before out flight home.

Lovely weekend with some great people and as the Barkers say: “it’s all about making the beer taste better” 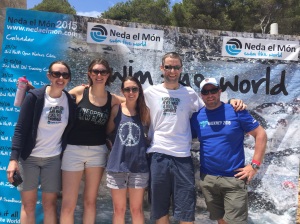 Cost: The race cost :€69, which in comparison to 10k races in the UK is an absolute bargain. To get to Mallorca we used EasyJet to Mallorca and despite being half term were incredibly reasonable. We ended up using Hertz for 3 days of hire car which cost €147 and accommodation was €99 per person for the 3 nights based on 2 people sharing.

Organisation: The organisation was good. There are always challenges faced when racing abroad but neda el mon accommodated non Spanish speaking participants by ensuring all communications in the run up to the event were in English as well. Additionally, post the briefing that took place in Spanish, they stuck around to ensure all English speakers questions were answered.

Challenge: The 9.5km swim will always be challenging to most, but with the other potential, not guaranteed, challenges that can arise in sea swimming, the challenge will only increase. They also offer a 3.2km option, which is a great shorter alternative.