The Mermaid cup, the SLSC’s women’s open mile cup, has been something of note in the Mermaid camp for a while, but alas we have never been able to win it because of Nancy Shaw.   Nancy is this formidable SLSC swimmer, who reigned victorious over most of the women’s open cups for several years, including the Mermaid cup and once whooped our butts during the mile swim, whilst she was heavily pregnant.  Nancy and family have now moved abroad, so despite our sadness that we were losing this great swimmer, we were finally optimistic about our chances of some cups in 2017.

On the day of the event, we did our usual Friday morning 6:30am training and then spent a day at work.  Perfect preparation!

Upon arriving at the lido, there was some disappointment, as Emma Watson (SLSC star baker EVERY week) was optimistic she would win the cup until I (Manda) had turned up and declared I was hoping to swim in 26 minutes.  She then offered me cake for a year if I let her win.  There was a fundamental flaw in her plan as Katie was still due to arrive!  We declined the cake offer, which shows how much this cup meant to the team.

The evening started with the under 10s race, which was a hot contested battle by the next generation of Team Mermaids and then the half mile race.

We then got in and found the newly repainted black market that signifies the start point as the mile is 17.6 laps of the lido due to its 100 yard length.

We were off.  Katie and I had been split up with Katie as number 4 and me as number 6 but as soon as the opportunity presented itself, Katie appeared next to me.  We then stuck side by side for the most of the swim, only separating a few times when Katie missed the wall on her tumble (Katie insists those walls are really hard to see)!

On the final length still side by side, I tried to keep our strokes in synch so we would touch together and then boom.  Everyone was pointing at me as the winner.  This was NOT the plan.  Katie had also been trying to keep us in sync so we would touch together but had held back slightly but I had snuck in and touched first.   We were both credited with the same time of 24 minutes and 47 secs.  Katie had been saying that if she didn’t swim under 26 minutes she was going to retire so I’m glad we beat that threshold! 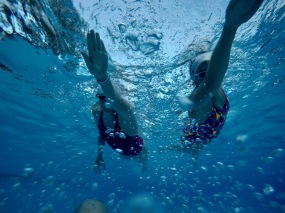 Hopefully we will get a chance to put Katie’s name on the cup next year.

As usual thanks SLSC and all the volunteers who ensure these events can run. 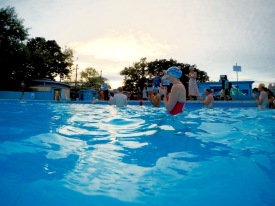