Team Mermaids’ Pool crawls started in 2014 off the back of wanting to tick off a block of pools for the  Winter Pool Challenge.  Somewhere along the journey we decided we actually enjoyed binge pooling and started doing it as a “thing”.

Last year we didn’t get around to doing any pool crawls (babies and stuff got in the way).  Paul aka Pivo realising this, whilst blog reading, threw the question out to the group:

I (Manda) responded that I thought 10 was possible and we would probably need 12 hours to get them all done.

‘If this is the worst thing that happens today I’ll be happy’ says Brian.  Spoiler alert: It wasn’t.

We swam our 1km with company from Wil of Guernsey swimming fame.  We did try to persuade him to come along with us for the rest but he wasn’t at all keen! No idea why.  Stay in Olympic 2012 nice clean pool or start schlepping west to dingy pools….

On schedule we left the aquatic centre.

Pool 2.  St George’s (via York Hall). (Brian)
Having left the Olympic pool, we got the central line to Bethnal Green for York Hall.  The omens were bad as we passed a dead rat on the way to the pool…  Paul immediately spotted the fact that the centre did not open till 8am (it was currently 7:50 so we thought we would have a short 10 minute wait.  Manda then double checked the timetable online and we realised that although the centre opened at 8am, the pool didn’t open till 9am.  Disaster!  A quick check of the next pool (Mile End) indicated that it also didn’t open till 9am, so we had to plan a quick trip to pool #4 (St George’s), and come back to Mile End and York Hall afterwards.

Luckily, there was a direct bus from York Hall to St George’s, so we got there just after 8.  This was the first time I (Brian) had swum in St George’s during the day, and it was a completely different pool with light streaming in through the multiple balconies on the south side.  We happened to pick one of the central lanes, which was above a set of water outlets, so we had a very unusual sideways current as we swum up and down.  Luckily we were the only people in our lane, so it didn’t cause any accidents. 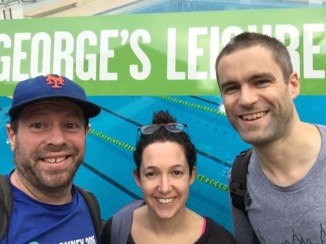 Pool 3. Mile End. (Pivo)
Somewhat back on track with pool 3, where we arrived by DLR and bus from St George’s. I had left my goggles at London Aquatic centre so a bad start for all so far.  Mile end is where we all used to swim at with Swim For Tri, but it had been a while. We were greeted by numerous kids everywhere and a large changing hall. A quick change and straight into the water. Unfortunately the pool seemed like it had not been cleaned in a while. The water was manky, but the plus was there was aqua aerobics on at the same time, so we at least had some tunes and a small boogie.  Manda commented she needed a cocktail to make this a proper Vegas style pool crawl. Good times. Back to the central line and retracing our steps to get to York Hall for take 2.

Pool 4.  York Hall. (Brian)
We finally headed back to York Hall.  It was an easy central line tube ride away from Mile End.  Somebody had cleared away the dead rat, which we took as a good sign.  There was some confusion getting in, as the receptionist started to explain that paying for a single swim would have been cheaper than using out daily pass.  He did not seem impressed that we were swimming in 10 pools, of which 8 were Better pools, in one day…  The kiddies pool at York Hall was busy with lessons, but the main pool was quiet (one other person in our lane).  The pool is 33.33m so we did a 30 length inverted pyramid set.

Pool 5. Ironmonger Row. (Manda)
Back on schedule we arrived at Ironmonger Row. We swim here every Friday morning at the Team Mermaids training session so I wasn’t initially that fussed about swimming here but it is a good one for pool crawling due to its central location.

I starting walking into the ladies changing room and shouted back to the boys “it’s like being home”.  My ambivalence towards this pool had suddenly done a 180.  There was something reassuring and reviving about diving into the cool, clear, calm(ish) waters of Ironmonger Row and I suddenly felt a lot more positive about the remaining challenge ahead.

Ironmonger Row is 33.3 yards long, which is about 30.4m so you only need to swim 33 lengths, but that would mean getting out at the other end.  Who would do that? Brian, on a one man mission to not have to swim a metre more than he had to.

Pool 6. Golden Lane. (Paul)
Ah Golden Lane, not something I thought I would be looking forward to, it being the shortest pool and somewhere in deepest darkest Barbican. After a great swim at Ironmonger Row, with a cold pool and nice changing area we were able to sit down and have coffee and cake at Look Mum No Hands – ahhh a chance to do something normal on a Saturday morning. This was the first pool we all had to pay for, 5£ and a small pokey changing room. Into the pool, and there were adult swim lessons and an elderly lady with a pink shower cap on, slowly going up and down the pool. Whilst Brian and Manda tried to work out how best to negotiate the human and noodle traffic in the pool, I got friendly with the lifeguard, told him what we were doing, and he kindly put in another lane rope so we would not disturb too many other swimmers. He thought we were all mad, and was confused as to why we were doing this. So were we by this point!

Pool 7.  Cally Pool. (Katie)
Given my general state of health, additional passenger and lack of recent swimming I had decided that I didn’t really fancy a full 10 hours of schlepping round the pools of London and therefore decided to join for the second half of the crawl only.  I was aiming to join at Ironmonger Row but parenting duties meant that I wasn’t able to leave home until 11.15am.  A misreading of the timetable saw me heading on the Victoria line to Kings Cross and by the time I had realised my mistake I didn’t have enough time to make it over to Old Street to join at Golden Lane.  I therefore decided I would get in 1km at St. Pancras (I do like the purple wall) before heading up to join everyone else at Cally Pool.  I arrived at Cally Pool ahead of schedule and therefore manged to get 1.4km (7 x 200m alt swim and pull) in before Manda, Brian and Pivo arrived.

Cally Pool isn’t the nicest pool in London.  Two of the lanes were being used for lessons and with a large ‘medium’ lane there was only a narrow fast lane which already had its full quota of alpha males plodding up and down refusing to let faster pregnant lady in front.  This made for quite a painful 2.4km / 1km.

Pool 8. Pancras Square. (Manda)
We walked to Pancras Square from Cally.  We had a nice walk through Granary square and along the canal.  This area once housed Kings Cross Pond Club so always brings back nice memories of when the Friday morning swim club went al fresco.

A sense of calm was now upon us as on schedule and nearing completion.  Brian then disturbed this calm somewhat by giving us a 4*10 length set.

Before we knew the 40 lengths were over and we were off again.

Pool 9. Oasis. (Paul)
We  arrived at Oasis, and I was still fuming about the type of set we did at St Pancras (seriously who does 4 x 250???).  I had written this set so knew it would be better.  We arrived via Covent Garden and all its hustle and bustle, but once at the pool, all seemed (relatively) calm. The medium lane in the outdoor pool was empty so we piled in there, all the time cruising past those in the fast lane (even me who was starting to fade… ok HAD faded). This set was mixed up, in order to distract you so the swim went quick, unlike St Pancras (Brian are you getting the hint!). The only thing worse than 4 x 250 would be an Uncle Davey 1 x1000 m set!!! We all noticed for the first time as well that Oasis has outdoor showers and a sauna, who knew? Not us.  My fading continued so Katie stepped up to the 3 slot now there were 4 of us, but at least after this it was the nicest pool, and then burgers!!

Pool 10. Marshall Street Baths. (Katie)
Marshall Street is a Team Mermaids favourite located just off Carnaby Street (so you can combine shopping and swimming).  The art deco setting and quite lanes made it the perfect place for a final stop.  Once again Brian being Brian only swam 33 lengths… we did 34.