Sunday morning saw a gaggle of open water swimmers and a token triathlete head to the west reservoir at Stoke Newington for Capital Tri’s final ‘the splash’ of the season.

My day started at 6am when I took the Katie Kenny approach to nutrition and had a biscuit for my breakfast before driving to North London.

We arrived at the West Reservoir and quickly registered. The reservoir is a lovely venue – so lovely that you can even have your wedding reception there. I’ve never been to swim here before because the timings have never worked for a RG Active session and to do a “on your own” swim session you need an induction, which is a bit of a nuisance and they get booked up well in advance. 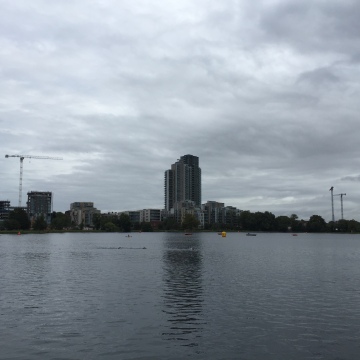 I was swimming the 3k at 7:25, whereas, most of the others were starting their 3km at 7:55. We had a briefing and then soon enough I was in the water. At this point with Brian, Dad Carr, David, Pivo and Josie being in a later wave and Katie being in Berlin, I decided to try make a friend with the nearest available man as I needed some clarification about how many laps I was meant to be swimming. Said man didn’t want to be my friend but I persisted until we set off. We were doing 4 laps of 750m (thanks ‘said man’ for clarifying this).

As seems to be the norm now I had to calm myself down over the first lap. There was a pack ahead, which I was never going to catch and then me and 2 other guys. I quickly pulled in front and with that accepted the possibility that they might draft off me the whole way.

After the first lap I reminded myself I wasn’t race fit and needed to relax the effort levels. Surprisingly this didn’t significantly impact my pace (see below) which should serve as a lesson. 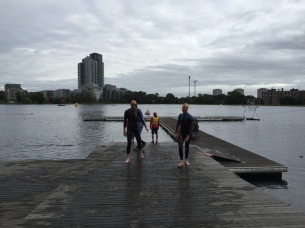 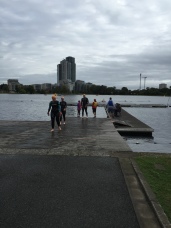 I sprinted to the finish and exited in a time of 52 minutes. I was hoping for 50 minutes but general consensus in the post race debrief was that it was 3.2 km not 3 km so this was on target.

It was a great event and one I would definitely be keen to do again.