Each year SLSC hold the anniversary challenge to celebrate the lido’s history. Participants swim one length for every year the lido has been open.  The lido opened in 1906 so those who are good at maths will work out that this year this was 110 lengths. At 100 yards a length this is just over 10km of swimming.

I really enjoyed the event last year so with Manda building up her distances following Miles’ arrival I persuaded Brian to (a) become a member of the lido and (b) enter the swim with me.

We were busy training away when I discovered a small diary ‘incident’ and realised that the weekend of the swim was the weekend that I was away in Berlin as Dennis was running the marathon. After a morning of tears at the thought I was missing the challenge I managed to persuade Brian to come and swim the distance a week early with me.  Poor Brian – the things we make him do!

We agreed to meet at the lido at 7.30am on Saturday morning (17 September) only to find out that there was actually an aquathlon on and the pool wasn’t open until 8.30am. Oh dear!  This kind of c&ap would never happen if Manda was in charge.

We went back to my place and then came back for 8.30am. We decided to split the swim up into 3 blocks: 40 lengths, 40 lengths and then 30 lengths.  We finished the first 40 lengths in just over 56 minutes and then had a toilet and gel break.  We then started again for another 40 lengths before stopping for another gel break.  We then set out for the final 30 lengths with me telling Brian it was just like a normal training session. He gave me one of those “I’m too tried to respond but I am unimpressed” looks.

We finished in around 2 hours 44 minutes of swimming time and about 2 hours 51 of total time. This was slower than last year (even taking into account the extra length) but I think the competition environment helped a lot last year.  I really enjoyed the swim.  We had the perfect weather in that it was overcast so the lido wasn’t too busy but the water was still lovely and warm. 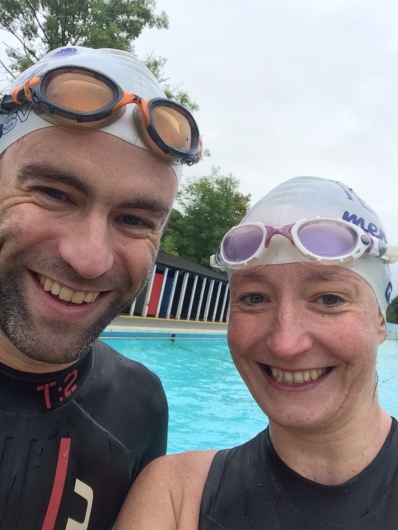 Once wasn’t enough for Brian though and he was still planning on swimming in the official event the weekend after. Unfortunately though he forgot his wetsuit and managed 72 lengths’ skins before having to admit defeat from the cold.  Next year B!