Every year since the 100 year anniversary of Tooting Bec Lido, SLSC have held a club challenge to swim the age of the lido in lengths.  Now if the lido was 25m then this would be a fun swim, however, (un)fortunately for us the lido is 100yds (91m).

So September came around and with it came the british winter a few months early.  This meant that the temperature at the lido was slowly dropping through the teens 17…16…15…14.  Please no lower!!!  The weekend before the swim we managed a 2 hour swim in the lido at 14 degrees in the glorious sunshine, however, the Thursday before the swim, we did 45 minutes swim at 7am and come 10am a colleague asked me if I was ok as my lips were blue.  Panic set in!

The morning of the swim we were greeted with sunshine but 13 degree water. It was the best weather, if not water temperature, we could have asked for.  After arriving at the lido just after lunch, the SLSC captains set about getting us all ready.  There would be 9 of us doing the solo, of which 4 of us would be wearing wetsuits, therefore, 5 were doing it SKINS.  SKINS, my skin is tingling just typing this.

To start we walked to the deep end and entered the water there.  This threw me and Katie off as we are used to walking from the shallow end to acclimatize but couldn’t really raise an objection whilst covered in our luxury neoprene.

And we were off.  We had decided to have our first stop after 45 minutes, so after 33 lengths we stopped and I had a sip of luke warm tea and then the chat started:

Katie: How many have we done?

Katie screams loudly: IS THAT IT?

Now at this point Katie was about to offer to take the lead, however, she didn’t have a chance to offer as I rapidly set off again in fear of being shouted at for taking too long at feeds.

This meant there was no conversation about when to next feed.  I thought it would be good to do 42 lengths this time.  You would break the back of it by taking you to 75 and therefore, would leave only 34 to finish.  However, Katie was thinking I was going to do around 30 lengths so started worrying once we got higher than that, that I wasn’t going to let her stop again until the finish.

I did stop, which allowed for more, now cold, tea and allowed Katie to take the lead for the final 34.  By this point I couldn’t feel my feet properly, which makes for a bizarre sensation when pushing off the wall at a turn and I also realised that I had been so preoccupied about the cold in the build up I had forgotten about the distance actually being a challenge in itself and my arms started aching. 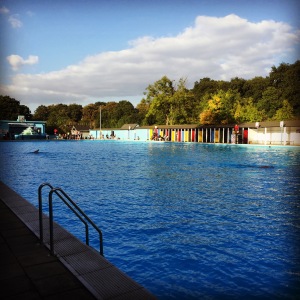 109 lengths later we were finished. 2 hours 39 minutes in the lido. It was a challenge for so many reasons but mainly, the cold and distance.  Others commented on the tedious nature of the lap swimming for that long, however, by swimming as a team it was like you always had company and I was never bored.  This was the first race since Max’s arrival that Katie and I swam together (it would have been bridge to bridge if it wasn’t for her seeing my warning signs!) so for me it was a definite season highlight.

Next year it is 110 lengths, so as an even number of lengths it might be back to a team mermaids relay instead.

Thanks to SLSC for a great event and special thanks to Nicola and Mandy for their organisation and support.