Being pregnant presented some interesting challenges to my (Manda) swimming training, however, I was able to continue to swim right until 40 weeks.  This was all made possible by lots of lovely people, mainly Katie, who continued to swim with me despite my speed and endurance not being what it once was.  It also helped that I had goals (swimathon/winter river challenge/staying fit for labour!) that kept me focused.

I honestly believe that swimming is the best sport for pregnancy.. You don’t need to do as much as me but it should be encouraged to swim throughout pregnancy.

Here is what I got up to swimming wise whilst pregnant.

Weeks 1-4
Most people don’t realise they are pregnant by this point so it is business as usual.

I did struggle one week due to a feeling that I was ripping my stomach muscles every time I pushed off the wall. Not sure what it was but after 2500m I got out. I decided to get back in 2 days later and just be less aggressive on the turns and I was fine.

Week 8-12
I’m getting slower.. Well maybe not slower but I’m fatiguing a lot quicker and for a long distance swimmer being able to handle 200m easier than 1600m is a bitter pill to swallow. Apart from that I’m still thoroughly enjoying my swimming and being around friends.

Week 12-16
I had to go to Hong Kong for 1 of the weeks and only managed one short swim there and I decided to go to the pool when the entire over 65 population of Hong Kong seemed to be there! This meant avoiding breaststrokers who seemed to be hell bent on swimming in the middle of the lane and kicking me. After that there was no swimming for nearly 3 weeks due to a combination of jet lag and a cough. I couldn’t take anything for it so just had to wait it out. Sorry to anyone who had the pleasure of miserable Manda during the time. I made my return for the 12 days of Christmas set and managed the 4K fine apart from the joys of now needing a toilet break mid swim. I’m also having to be a bit more selective on what costume to wear.

Week 16-20
No Christmas sea dip for me. Brian tried to suggest the baby needs to get used to the cold water asap and I totally agree but it was more the risk of getting sick again that stopped me.

I am still doing the sets I write, I have just stopped trying to do anything that is over 80% effort and anything that involves less breathing than normal.. Maybe I should stop including anything over 80% in my sets but then how would I inflict pain on Katie and the others?! I am also finding that I am not fatiguing as I was at the beginning so maybe that was just a first trimester thing.

Week 20-24
Over half way and perfect timing for a 10 minute time trial with Swim for Tri to see how much speed I’ve lost. Admittedly there was some tactical drafting going on (thanks Simon and Katie in the later stages) but I did 700m and as I can’t swim at max effort I was pleasantly pleased with that. Previous best was 725m.

I am still doing 4km for my weekend swim. The idea is to keep up this distance on the weekends for as long as possible, especially as I need to swim 5k for the swimathon.

Week 24-28
I have admitted defeat and invested in some size 36”(which is 2 sizes up from my usual size) swimming costumes.  The maternity ones are just fugly and don’t look like they have been designed with swimmers who actually want to swim frontcrawl so my plan is 36” for now.

It is only one month to go until Swimathon so I am still doing a long swim of 4km or longer a week to ensure I can cope with the 5k distance.  We even managed a cheeky 50*100m down at Charlton one weekend in preparation for Katie and Brian doing 100*100m in April. I plan to go along but probably not do the full 100..although.. No I won’t..I promise!!!

I also managed to demonstrate in week 26 how 1) I had lost my sense of balance 2) I am not designed to be on land by falling off a pavement when 100m from the entrance to the swimming pool.  My knees took the brunt but a week later I was back in the water…just ALOT slower for the week off (or maybe it was all the food I ate in Italy whilst I wasn’t able to swim!)

Week 28 – 32
I have admitted defeat part II.  I have a 2 piece.  I’m baffling the swimmers of London.  Female, pregnant, 2 piece, fast lane -> SAY WHAT?!? Although after my week out of the water following “pavement gate”, I probably don’t belong in the fast lane anymore.  sob sob sob.

Swimathon! I did it.  5k in 1:25.  My hope was under 1:30 but that was including me taking rests as needed, so I was chuffed!  I only took one break for about 45 seconds at 3km.  I even managed to get a shout out from Duncan Goodhew on twitter. 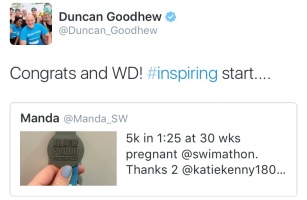 Week 32-36
No swimathon to train for but still have 3 weeks of the Winter River Challenge to go so still trying to get the 9641m a week done which means a 4k swim once a week.  There were 2 weeks where I didn’t make the weekly goal distance because I had to get out the water at Charlton 1.5k into a 4k swim as I was suffering badly from acid…oh the joys of being pregnant.  The following week I missed the target due to a combination of taking it easy for once and our Tuesday night session being cancelled.

Week 36-40
The winter river challenge is over!  I am still swimming.  On my last day of work we went for a dip at Kings Cross Pond Club but my already taut skin couldn’t take the cold water and felt like it was on the verge of ripping.  So I got out pretty quickly… ok VERY quickly!!  Very bizarre sensation.  Hoping the lido warms up (and I find my lido pass!) so I can get back in.

I went for a swim at Hampton on my own, whilst the others were busy training for the jubilee 10k in the lido and was pleased to report that I was the fastest person in the pool (..just!).

This is where the diary ends… And after a few weeks ordered rest I will be back training for Coniston 2016, which could be my biggest challenge to date.  Watch this space.

Special thanks to Swim For Tri, RG Active and #thisgirlcan for keeping me swimming and Katie and Simon for not kicking me out of the fast lane!