Watching a marathon – nearly as tiring as running one

Dennis (Katie’s husband) and his friends, Ali and Dawson, over the last year have been competing in a challenge to run 1,000 miles. This competition culminated in the Berlin Marathon on 25 September 2016.  With emotions and nerves running high Max and I joined the guys in Berlin to support them.

After some serious carbo loading the night before (I wasn’t doing anything but it would be rude not to participate) we were up early to walk down to the start. We said goodbye to the guys and Jen (Dawson’s wife) and headed back to the hotel to meet Bows, one of Dennis’ friends who lives in Berlin and was going to be our tour guide for the day. 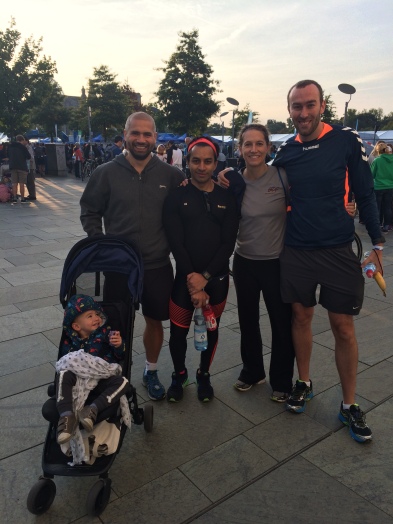 We tried to get to the start but the barriers made it hard to get round to a place to watch. We settled therefore for the 7km mark.  Watching the pros come past was amazing.  They made it look pretty effortless.  We utterly failed to see Dawson and Jen but we managed to see Ali and Dennis who were running together at this stage.  They were full of excitement and it was high fives all round.

We then set off to move to the 21km point. This was about 4-5km away for us and with Dawson and Jen already at about 12km when we left the race was on!  Despite about 2km of running with the buggy on my part they were long past the half marathon point by the time I arrived.  I did manage to catch Dennis and Ali though.  By this point they were looking a bit more hot and bothered than excited but they waved and shouted back.

After this we had just a short walk to the 38km point as the course did a massive loop. This time we managed to catch Dawson and Jen and pass over the requested Gatorade.  I think Dawson was more excited to see the Gatorade than to see us!  By this time Ali had moved ahead of Dennis and we missed him in the throng. We almost missed Dennis too as the tracker was showing him well past our point but as we were leaving to walk to the finish we spotted him.  At this point there was only energy for a half-hearted wave at us.  We then sprinted over to the finish, which is just part the Brandenburg Gate, arriving just after Dennis crossed the line.

Dawson and Jen finished in 3 hours 36 minutes (a 10 minute PB for Dawson) in an absolutely perfect demonstration of pacing. Team Mermaids are impressed!  Ali finished in 3 hours 52 minutes and Dennis in 3 hours 55 minutes, both very pleased to go under 4 hours and not to have to run a marathon ever again.  Well done everyone!