“My name is Katie and I am a co-dependent swimmer”

I find it very hard to train by myself.  I faff about before I leave the house, I faff when I arrive at the pool and then I half heartedly plod up and down and more often that not get out before the end of my planned set.

With Windermere One Way (WOW) fast approaching and my normal training buddy Manda out of action due to her shoulder injury, I decided the best way to force myself to do some longer distance training was to enter a race!  With this in mind, while on a visit to Kate B’s in Bristol, I was flicking through a copy of Outdoor Swimmer checking out the forthcoming races section.  Dock 2 Dock sounded like the perfect option.  It was close to home, 5 weeks before WOW and they had a 10 km option which would be decent preparation so I entered.

On Saturday 28 July I turned up at The Crystal Building near Victoria Docks for the very civilised race start time of 10am to meet up with David and Kritsa who were doing the 5km swim.  The weather in the lead up to the race had been absolutely scorchio and the water temp was reported by Josie to be 24.5 degrees just a couple of days before.  This left me with a dilemma – should I wear my wetsuit or not?  I really wanted to wear it as I was underprepared to swim 10km to say the least and the wetsuit would help with this but on the other hand I have been training all year without and I didn’t want to overheat.  Luckily the weather broke on the Friday night so the day was much cooler and the water temp was just over 22 degrees so I decided to go with the wetsuit which was the right call in the end I think (additional post Bantham chaffing aside).  The break in the weather unfortunately brought with it some wind but more on that later!

After the longest race briefing I have ever had, we started to enter the water 25 swimmers at a time.  David and I entered in the second lot of 25 people which meant that we had quite a long wait in the water.  Finally at around 10.20am everyone was in the water and we were off!

The race consisted of two 5km loops starting at The Crystal Building and then heading up to a feed station near City Airport.  There were apparently buoys every c.250m of the course but on the way up I think I only saw one buoy!  This made for a slightly chaotic experience but on this first lap I decided I would just follow the swimmers in front and hope for for the best. 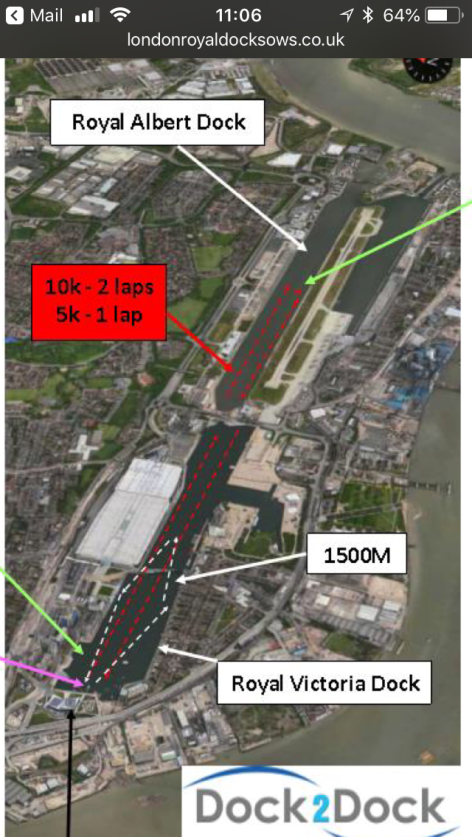 On the first lap I was just starting to lose hope that the turn round point would arrive when suddenly I was at the feed station.  I took a quick drink of water and checked my time.  38 mins for 2.5km.  Okay not awful!

I then turned for the swim back.  Oh my days (as Manda would say) the WIND!  It just felt like it was catching my tow float and anchoring me to the spot.  I battled my way back down the course and got to the 5km check point.  Agh that second 2.5km has taken me 48 mins.  Hummm not so great.

There was meant to be feed station at the 5km point but I couldn’t see it so I just set off again.  After about 100m more, I decided that I was just too low on energy and stopped to have the handy gel I had popped up my wetsuit leg.  Now the expiration date on the gel was September 2017 but they are the kind of thing that don’t really go off right?!

On the second lap there were fewer swimmers on the course as the 5kmers were getting out, so my tactic of following the people in front wasn’t working as well which meant for some extra swimming.  Other than that the pattern of the second lap was similar to the first lap.  The way up was okay, especially now I had an idea of where the turn around point was.  The way back was like swimming through treacle.

I finally made it back in 3 hours and 9 minutes.  I said to myself before hand that it was all about just finishing and the time didn’t matter.  I was still a bit disappointed to not go under three hours.  The winner, however, only swam 2 hours 50 and the fastest female was 2 hours 55 minutes which gives you some idea of the conditions.  In this context 3 hours and 9 minutes didn’t sound too bad.

Overall, a well organised and convenient swim but with tough conditions on the day.  Definitely one I would do again – although maybe the 5km option next year! 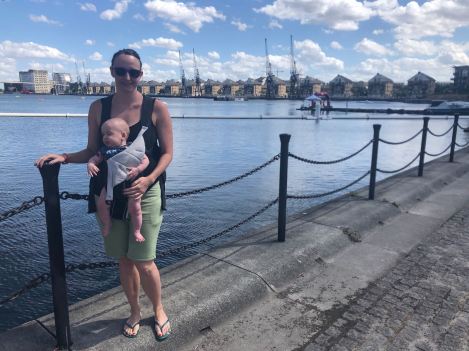