During our stay in Talloires on the shores of Lake Annecy, we did a couple of DIY lake swims.  Nothing too strenuous as they were either side of our 5k race (see here).

We ended up staying in Talloires rather than Annecy itself mostly because me and Brian visited it last year when we were staying in Annecy (see here) and I thought it would fit everyone’s needs well.

We arrived Monday and on the Tuesday afternoon post lunch (sorry Brian’s mum*) we headed out for a swim.  We did the same swim Brian and I had swum last year as our warm up, so we knew it would be roughly a mile swim (we didn’t account for Adrian, in his wetsuit, zig zagging us across the lake rather than following the yellow buoys).  This swim crosses a ferry path so we had checked we wouldn’t be anywhere near that during that time.  It was nice warm up swim and for Katie and Adrian who hadn’t swum in Lake Annecy before it was a nice introduction to the clear blue waters that awaited them the next day. 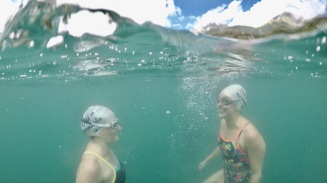 The Friday after the race, the 2 of us headed down early morning for a dip. We were greeted to another group of 4 swimmers getting ready to get in. As *professionals* me and Katie were undressed and already swimming off when they were still blowing up the one tow float between them.

We got in and swum off in the opposite direction to the first swim. We swam from buoy to buoy and past a couple of swimmers doing some backstroke. Then after having swum for 800m we turned back (well after we stopped to take in the beauty of it all and I took a couple of snaps of Katie swimming!). On the way back we nearly swam into someone who was swimming across our path, which woke me up! Then I got the fright of my life from a swimmer blasting past me with a monofin… I didn’t have a clue what it was for a second…Fish, shark, mermaid…. Swimmer?!? We returned to shore to see that the group of swimmers that were getting ready when we left had decided to swim across the lake rather than a shore line swim, which to the overly cautious swimmer in me seemed crazy considering, despite the early hour, there were already speedboats out there with water skiers.

Know if there is boat traffic – whether that be recreational – boats, pedalos etc or organised ferries. If the later check the routes and timetables or just simplest AVOID.

Swim in a group.

Stay close to shore or within the designated area.

Check the weather forecast. You don’t want to get caught out in a thunderstorm.

*Brian’s mum thinks you should wait at least an hour post food before swimming.  Rebels!