After having my baby in June I (Manda) had a somewhat compressed season, where I trained solely in Tooting Bec lido. As the water temperature dropped at the lido I was still going down once or twice a week and before I knew it, it was 10 degrees and I was truly hooked on the challenge of cold water swimming.

So when the entries for the UK Cold Water Swimming Championships (UKCWSC) came up and it was still a positively tropical 7/8 degrees at the lido, we enthusiastically signed up for a 4×1 width relay. As Brian commented ‘how cold could 33 yards be?’

The UKCWSC take place at Tooting Bec Lido every 2 years. It is a championships but it feels more like a festival of cold water and all the people that dare to swim in it. Everyone and anyone is encouraged to have a go at events ranging from Crisis’ Big splash to the head up breaststroke with added hat competition to 99 yards freestyle.

After signing up, autumn became winter and … well… it got cold…. MIGHTY cold. I was collecting used milk cartons at home for the igloo (see photo below) that Barbara from SLSC was building for the champs and as the cartons piled up, it was a daily reminder that I hadn’t swum at the lido for a while. Brian and David (the 4th member of Team Mermaids for the UKCWSC), taking the challenge seriously, carried on swimming at Tooting Bec and Parliament Hill respectively. Although I am pretty sure David took his time in the sauna more seriously than the swimming. Katie, like me, had been nowhere near the lido since it hit 7 degrees.

The water was hovering around 4 degrees and then no sooner had the Christmas baubles been packed away the weather in London became baltic, but the UKCWSC wasn’t until 28/1 so there was plenty of time for the weather to get better and for the water to warm up. Right??

Finally the day arrived and the water was 1.5 degrees (Lynne Cox would be proud). As we registered we tried to distract ourselves from our pending doom by having a look around all the fabulous stalls. It was like the Team Mermaids’ Christmas wish list in real life!! 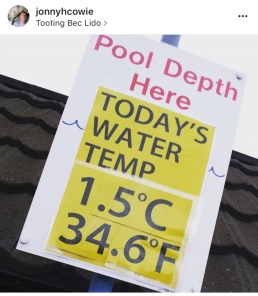 After our briefing from Giles, current president of SLSC, we headed to our respective sides of the lido. I said good bye to Katie, whilst giving her the look of “we can still not do this” but off she marched and I knew my fate was sealed. 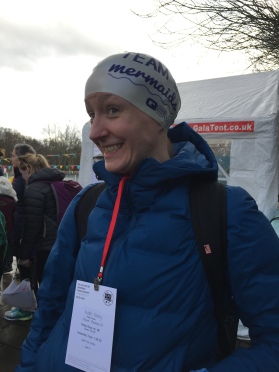 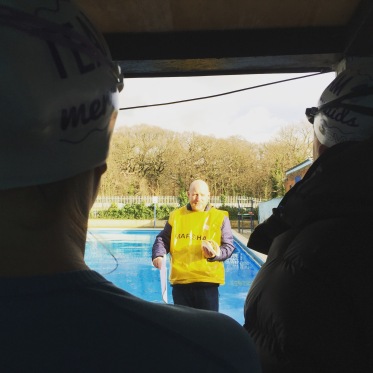 Brian was leading us off, then Katie, then me and then David would bring us home. David chose to swim last as there was a lower probability of him having to swim as I was 3rd. Now there is an urban myth about me and cold water swimming that goes something like this:

Once upon a time Manda decided to do the OSS December dip with the other Mermaids. The water was a balmy 5 degrees. The mermaids got in and swam. Manda got in, walked for 5 metres, then turned around and got out. Dom was disgusted. They all lived happily ever after.

So in short I was a massive flight risk. I didn’t know whether once in the water I would just get out. As much as I had psyched myself up for actually swimming the width, I knew that I wouldn’t be in control of myself, so I had to just hope that I actually started swimming and made it to the other side.

With shouts of “get your shoulders under the water” Brian was off… I was sheepishly standing on poolside waiting to remove my final layers of clothes… then Katie got in and took over. Now standing poolside in just my costume… She was getting closer… too close… so I got in and then…

The next thing I remember is my feet hurting and then hurling myself on poolside in probably the most unlady like fashion ever.

Victorious that I had actually made it to the other side, I returned to my family. Whilst asking me how it was, I proclaimed in my post swim euphoria “I don’t even remember Katie touching the wall”. Dom replied “that’s because you were already swimming when she touched. Your take off was dodgy to say the least”. Whaaaaaaaaaaat? I couldn’t remember her touching the wall but surely I waited?! I decided to tell the team what Dom had said so that if we did suffer any penalties then at least it would be clear whose fault it was. Then Lisa, who had come to spectate, sent through some photos of our race and there it was in all its photographic glory. Katie gliding into the wall and me already a couple of metres away! 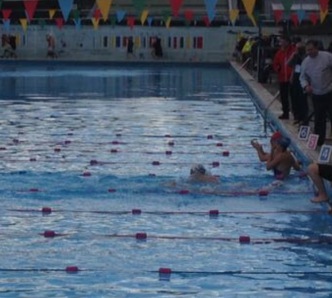 In the end we came 7th in our category and had PENALTY next to us, but then again so did most teams. Next time we are going for the win (if they let me in the team again!) 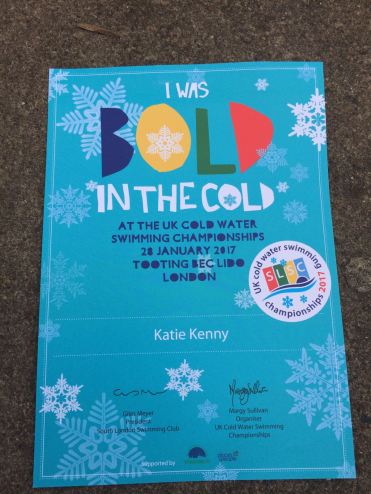 Big thanks to SLSC as the event organisation and execution was supreme and well done to everyone who was involved in the event.