I (Manda) was meant to be doing Windermere One Way again this year but as you might have seen from earlier blogs I have been suffering from a shoulder injury so I made the decision to pull out.  l still had every intention of going to the lakes with Katie, Brian and David whether or not I would be swimming.  Katie and Brian would be swimming one way Windermere and David had signed up for his first Coniston.  Entries were still open for Coniston so I foolishly entered to make sure I wasn’t the underachiever of the weekend!

The morning of the swim Katie kindly drove David and I over to Coniston.  We were both in the last wave so didn’t start swimming until around 11:30 (which makes for some interesting nutritional challenges seeing as I normally have lunch at 11:45).

We were stood on the bank and as usual Colin casually started the wave, which was a surprise to David who was waiting for a water start.  Me, being a Coniston veteran and therefore knowing that your time starts when YOU go over the timing mat, stood back away from the timing mat until I was ready and there was clear water for me to get in and swim.

During the swim there are mile marker buoys along the 5.25 mile swim and then there are also feed stations at 1.5, 2.5, 3.5 and 4.5 mile points.  The first mile went by relatively quickly with nice calm water easing you along.  I was feeling the cold during the first mile but that was the only time I thought about it so the 16.8 temperature wasn’t so bad despite a summer of +20 degree tropical water swimming!

The trick with nutrition is to take it before you need it so I had already decided to make myself stop to have a gel at the 2 and 3.5 mile marks.  I also wasn’t racing so I knew I would be ok to stop and have a drink at the feeding stations if I needed.  Not so much because I was thirsty more so to have a bit of human interaction!  The thing that amazes me about Coniston is how polite everyone at the feeding stations are.  You all are there floating in the water and you hear things like “Would it be possible to have a jelly baby please?”, “maybe you have some water upon that vessel of yours, that I could perhaps have a sip of?”… ok maybe not the last sentence but trust me it was super polite and friendly. 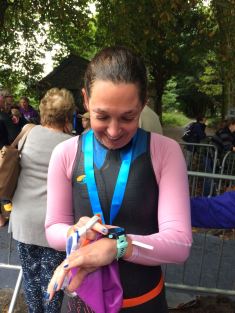 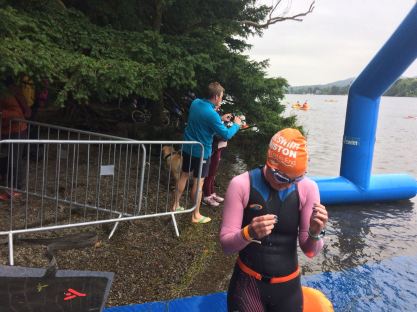 Once I survived the longest mile in history, it was time to settle down and get to the finish.  My shoulder wasn’t great but never did I think about getting out.  I came to shore at 2 hours and 24 mins to see David and Katie waiting for me.  I was flipping between happiness because I had finished and wanting to burst out crying because I was overwhelmed that I can gone from struggling to swim 4 lengths of the lido at the beginning of summer to swim 8km.

Now it was Katie’s turn to swim…