2018 was the 4th year of the Lago d’Orta Oceanman event – a 14km end to end swim of one of the northern Italian lakes.  Since its inception I (Manda) have been keen to give it a go but 2016 I gave birth to my son the same month and last year I couldn’t do it due a diary clash with the cyclist of the family.  2018 was MY year – we planned our trip to Italy around the swim and ensured everywhere we stayed beforehand I would have access to water to continue to train in the run up to the event.

Then…. my shoulder went in early January and to cut a long boring story very short, I spent the next 5 months trying to patiently fix it.  By end of May I admitted defeat and said I wouldn’t be swimming the event.

Whilst in Italy I continued to get emails from the organisers reminding me I hadn’t completed all the information needed for the swim and at the same time I was also managing up to 4km in the pool.  I decided to email the organiser back and ask if I could drop down to one of the shorter swims, they said YES!  They didn’t say which of the shorter events 1.3 or 4.5 I would be switched to….

I met David and Brian out in Orta – they were still doing the 14km.  We went off and registered on the Friday afternoon and I confirmed I was doing the 1.3km.  I was slightly disappointed but at the same time I need to keep on the road to recovery for the other summer events and I am just grateful to be able to swim at this point.

The day of the event I was all alone 😦 – the boys’ event started a lot earlier than mine so it was with great trepidation that I got on a bus to the finish area at Lido di Gozzano.  I was feeling so irrationally nervous and sick but  I sat next to someone speaking English on the bus.  Her and her family live in Milan and were going to the lido for the day not for the swim event but the nice informal chat calmed me down tremendously.

Once at the start area, I confirmed, through the power of sign language/wildly gesticulating/shouting words in only a way that a British person who doesn’t speak the local language can, that wetsuits were optional, so I decided to swim skins.  Yes it would impact my speed and therefore, positioning in the race but I am a lot slower than normal so the time wouldn’t be great either way! 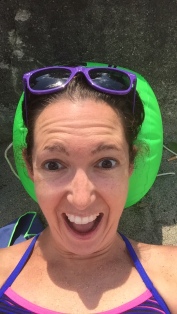 I then had to hand in my bag including my phone…Take anything just NOT THE PHONE!  This meant for over 30 minutes I sat in the start area in a swimming costume just holding cap, googles and a tow float! There was NO ONE speaking English.  The event draws a lot of Russians and Ukrainians so I entertained myself by watching their in-depth photoshoots and I might have also had a cheeky swim!

We then got on a boat to Miami Beach – oh yeah! (Really as not as glamourous as it sounds!).  All the swims (14km, 4.5km and 1.3km) are swims from somewhere on the lake straight back to Lido di Gozzano so everyone finishes at the same place and there is no boring lap after lap to rack up the distance.

No sooner were we off the boat then the race started.    The 1.3km went by in a flash, well 20 minutes, but it was lovely.  Apart from someone tapping my feet for what felt like forever (they disappeared after I did a cheeky breastroke kick!), I enjoyed every second of it and hearing the commentator announce me back to shore with the classic “A-MAN-DA-REA-AD-GREY-AT-BRIT-TAN” made me beam from ear to ear.  I have missed racing!

The shoulder injury sucks but it has made me even more grateful that I am involved in open water swimming and everything that comes along with it.  So if it takes longer than I hope to get back to swimming properly then so be it as long I can do things like this I will be happy!

and who knows maybe next year I can do the 14km?! 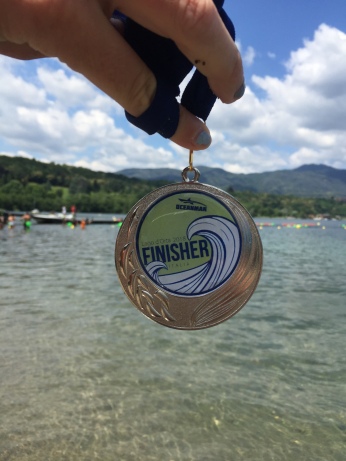 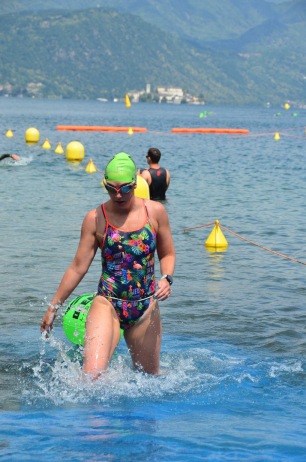 Registration – It wasn’t the best on the Friday as everyone was in one queue, which turned out was just for the 4.5km swim! A few more signs or someone explaining which queue to be in would have helped not waste time.

Location – Gorgeous! I have been to Orta before so knew what to expect but even after swimming in 3 other lakes on the same trip, I still reckon it is the best.  The facilities at the Lido di Gozzano are also good and makes for a great party atmosphere with every distance finishing there.

Swim – all 3 swims are point to point.  You get taken by boat from Lido di Gozzano to your start point and swim back.  I can’t comment on the feeding stations etc but for me it was super well organised.