After our week in the lake district last year, we were keen to do a longer Buttermere swim and also explore some areas of the lakes we hadn’t got to.

Saturday we arrived in Penrith accompanied by David and Brian to pick up our very small hire car, which with 3 tall adults, little me and our accompanying swimming paraphernalia meant the poor car was destined to have a challenging weekend.

We follow various Lake District residents on Instagram/twitter so we were grateful that  @suzannaswims (who now offers bespoke lake district swimming tours www.suzannaswims.co.uk) and @lottiethompson gave us advice when we ask where to swim in Derwent.

For our Derwent swim we started from Calfclose bay, where you can park 300m away in Great Wood NT car park.  We swam off with the idea that we would probably do around 15 minutes/1k taking into consideration we didn’t want to get cold (me, Katie and Brian were skins and David was in his thermal wetsuit!) and we were saving ourselves for Sunday’s race.  Despite the initial face burn the water felt “ok” or at least I thought it was until I tried to talk at 14 minutes and could hear I sounded almost drunk!  We promptly swam back to shore and therefore, ended up being in the water for around 30 minutes.  A quick change on the shore and a dash to the car where the heaters were turned up to the max.  Poor David who wasn’t remotely cold was subjected to sauna like conditions for the drive!

We dropped our stuff off at our hotel on the banks on Thirlmere.  Despite this being a non-swimmable lake/water (who knows what it is!!) this was a great location for us to be based as only 25 minutes from Keswick, 20 minutes to Ambleside and 40 minutes to Buttermere.

It was also a 5/10 minute drive from Dobgill car park where you can walk 20 minutes (uphill) to Harrop Tarn.  Following the instructions provided to us by Lottie, we eagerly set off.  According to Lottie getting there takes “10-20 minutes depending on hill fitness”…needless to say we are not hill fit!  The walk takes you up through the woods and then slowly you can hear water gushing getting louder and louder.  After coming out from the woods, you are greeted by a waterfall.  What a magnificent treat.  Further along the path, the tarn appeared.  We made our way through the grass/bog (see pics of Brian bearfooted!) to the water’s edge.  The water was Baltic.  We took it in turns to have a swim – it lived up to my magical expectations and then some.  Rolling hills, lily pads on the water, dark black water, pine trees, no one around -> MAGICAL. 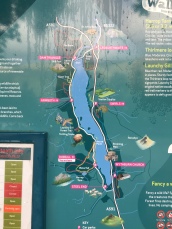 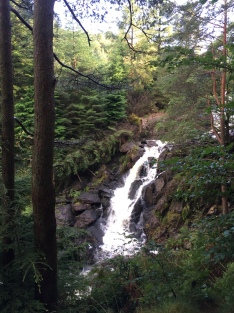 After a quicker dash back to the car whilst the light was fading, we headed back to the hotel to pick up Katie, where she was deservedly resting at the hotel and headed to Ambleside for some pasta and then went back for an early night.

Note: if you do fancy some lake crawling, please ensure you read the below:

So Sunday was the day of the race.  It dawned nice and sunny but no sooner had we packed the four of us and our luggage into our tiny Citroen C1 it had started to rain and that turned out to be the order of the day.

The race didn’t start until 10.30am but we had heard horror stories about the state of the parking in Buttermere Village so aimed to arrive nice and early.  Having traversed the winding roads into Buttermere with our car barely making it up some of the hills we arrived at 8.30am and secured our parking spot.  It was still raining so we stayed in our car to wait it out.  During a short gap in the rain we rushed to register and for refreshments in the café which had opened early especially for the swim.

Manda, Brian and David were doing the 10km race.  I (Katie) was originally entered into the 10km as well but I am expecting a baby next year and severe sickness means I have done a total of 5 training sessions in the last 8 weeks which meant that I wasn’t feeling up to the 10km and dropped down to the 5km.  I almost changed my mind back again when I saw that the 10km race hats were purple!

The time soon ticked away and we were changing into our wetsuits and heading down to the start of the race.  It was still raining….we waded through what I can only describe as a bog to get to the start (okay well maybe not a bog but I am from London so I am mudaphobic) and arrived at the water’s edge.

The start of the race was about a 5 minute walk up the lake so I waved goodbye to Manda, Brian and David as their wave was starting 15 minutes before mine.  Soon it was our turn and I was walking up to the start.  One good thing about the cold and miserable weather was that it didn’t actually feel ‘that’ cold getting in.  It was one of the things I had been worried about, after a summer of a lido of 18 degree plus the advertised 14 degrees of Buttermere was quite intimidating.  I was wearing my booties though which helped keep me warm.

We all piled into the lake and started swimming…then about a minute later we all stopped again.  Oh you we were only swimming to the start!  You could see a lot of confused people frantically trying to re-set their Garmins.  Finally we were really off.  I swam down to the first buoy which seemed to have come loose and drifted to shore so a load of us then had to swim back up on the other side to next to the next buoy.

Conditions for the swim were really tough.  You felt like the wind was in your face the whole time which was making the water pretty choppy.  I wanted to give up a 100 times but before long I was at the top of the lake and then across to the other side and which point I had no choice but to swim back down.

I finished in 1h 30 mins which given my lack of training and extra human baggage I was actually reasonably happy with.  I do think the course was a bit short though as there were a couple of buoys at the top end of the lake on the course map which I don’t think were there.

After finishing I, very inelegantly, exited the water and went to retrieve my stuff.  I was walking back to the car when I found Manda huddled under a tree getting changed.  ‘I thought I might find you here’ I laughed.  ‘I wasn’t cold’ she replied ‘just miserable’.  I knew what she meant.  Buttermere is absolutely beautiful and a still one of my favourite places I have ever swum but the rain, wind and waves had not made for the most fun experience this time round.  Manda wasn’t alone with an early exit.  Out of 170 registered to swim only 56 people finished the 10km.

We quickly got changed and then went back to see the boys finish.  David was beaten by only a few meters into second place in a time of 2h 28 minutes.  Brian in a hitherto unseen racing gentlemanliness let the lady he was swimming with finish in front of him coming in fifth in 2h 39 minutes.  Well done guys! 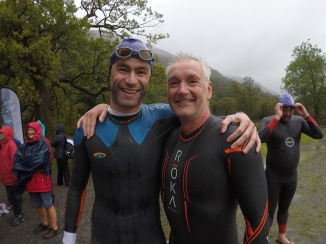 After finally getting changed and dry (well drier!) we couldn’t face going back to the lake for the prize giving so we headed back to Keswick for some well-earned lunch.  We mooched around Keswick eating fudge and drinking tea until it was time to get back for our train.

A lovely weekend despite the rain and race conditions – we will definitely be back in the Lakes next year!