Paddle Round the Pier, Pizza and Saltdean Lido

Our trip to Paddle Round the Pier didn’t start too auspiciously when about 10 days before the event Manda emailed with a title that just said ‘there are two races which one are you entered for?’ Err two races on the same day? This prompted lots of searching through emails and fears that we might be actually be entered into different races. Luckily we both had both gone for the Swim Trek organised 1.5km at the very civilised 10.30am rather than the Brighton Tri Club organised 2.5km at 8.30am. There was some initial discussion of doing both but sense soon prevailed!

So Saturday 2nd July 2017 saw us, plus Mer-Husbands, plus mini Mermen heading down to Paddle Round the Pier in Brighton. Paddle Round the Pier is an annual two day festival of all things swimming, surfing and sea related. The festival is over a large area just in front of the beach and has loads of stalls with food, clothes, activities and loads of other stuff. After a wander through the festival we registered for the race, got changed and headed down to the start. At the start we bumped into Outdoor Swimmer’s Simon Griffith who had swum in the earlier 2.5k race who politely enquired why we were only doing 1.5k when long distance is our thing.

After a race briefing we were off. We had expected a water start so it was a bit of a surprise when the gun went and we had to run in. We took quite a leisurely approach to waking in which in retrospect was probably a mistake as we we were right in the melee being kicked and pushed. My only goal for the first 100m was not too lose Amanda even if that meant having to breathe to the left! Luckily we managed to stay together as we headed out to sea.

The first 200-300m were pretty tough with a combination of the rough sea and still having lots of people around us but once we turned along the shore we were greeted by amazing views of the shore line and the burnt out West Pier. We should probably have listened to the safety briefing more carefully as we ended up on the ‘scenic’ route after Manda sighted the wrong buoy but despite this we were, surprisingly quickly, turning back towards the finish line on the beach. Not too surprisingly, as it turns out as both our Garmins had the course at 1,290m rather than 1.5km. 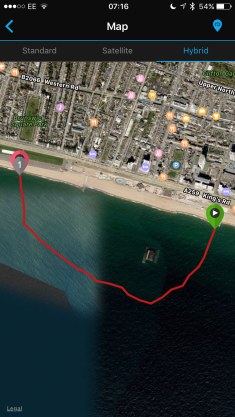 Overall we finished 7/8 (3/4 women) in 21 mins 40 secs. I can’t say I loved it at the time but by now, a bit like childbirth, the swimming hormones have kicked in and all I remember of it that it was good fun.

After the swim we wandered back through the festival and watched BAD Ukes, a ukulele band playing pop songs – it was better than it sounds! We then went to Fatto A Mano for pizza which was very yummy and I would recommend if you are ever in the area.

Full from lunch we then headed about 20 mins down the coast to the recently reopened Saltdean Lido. Saltdean has lovely Art Deco style with a main pool, a kids pool with fountains and a large grass area for sitting. The mini mermen has an amazing time playing in the water and we enjoyed aperol sprits ice lollies (over 18s only)! If you are in the area Saltdean is well worth a visit.