I (Manda) decided, for some silly reason, that Italy was a better choice than the Dart 10k this year.  I was genuinely sorry to miss out but I did get to do lots of awesome swimming instead, including a week of beautiful swimming in Elba.  Elba is an italian island off the coast of Tuscany with approximately 150 beaches.  Some of these beaches are easy to reach and some require a little more imagination.  Here is my DIY Elba swim adventure.

Enfola
Small but perfectly charming bay where you could easily base yourself for the day. It is also where Mimmo realised you need to breathe whilst swimming.. I’m sure the other swimmers appreciated his gasp upon the realisation.

Viticcio
It had so much promise but the beach itself was covered in seaweed and the same seaweed clouded the water. A 10m swim and you were clear. 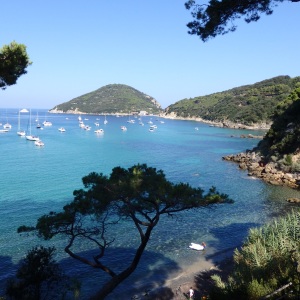 Procchio
This long strip of sand is home to a massive bit of water for swimming and also has loads of water sports stuff (windsurf, sup, pedalo etc) for hire. There were several other swimmers doing laps of the bay.

Paolina
After spending a few hours at Procchio we decided to get in a bonus dip at Paolina. Beautiful little cove bay with a rock out in sea that makes for a post card swim view. Absolutely spectacular.

Scaglieri
A small little beach that is separated from the larger La Biodola by just a walk and a few rocks. Despite the proximity this beach has its own different personality and is an absolute joy to swim in. 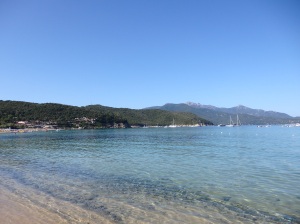 La Biodola
I managed to get a swim in here thanks to chasing after Mimmo on a SUP. The length of the bay from Scaglieri to La Biodola is approx 700m so lots of lush long swimming to be had. 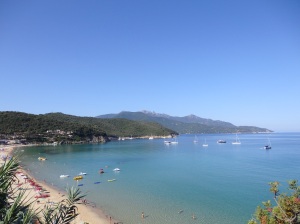 Fetovaia
This bay has the most crystal clear water I have found so far. It is shallow for a long way out but that didn’t stop me starting to swim. I did see my first elban jellyfish, however, after my jelly soup experience and visibility so great I didn’t panic.. Which is a first!

Sant’Andrea
After winding down the wiggliest road we arrived at Sant’Andrea and abandoned the bags in the only spot available at 5pm on a rammed beach. After swimming over a few large boulders we reached clear water where we found massive fishes that wanted to paddle with us! 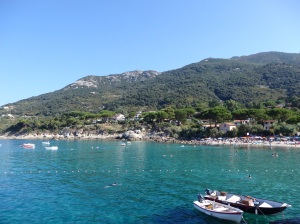 We were going to get in a bonus dip at Scogliera Sant’Andrea but sea urchins and no sea shoes meant no swim. No one likes prickly feet.. Right Suz?!

Naregno
We arrived at this beach with intention of spending a day there but after a couple of dips the lure of visiting another beach proved too much.

Straccoligno
We had the worst pizza EVER at this beach and only got in 1 short swim here after which Mimmo declared ‘do you think people think we are weird?’ …Obviously! Onwards.

Morcone
We headed over to Morcone for the final swim of the day but upon arriving at a beautiful beach we saw the lifeguard and several other people standing over a bucket. I knew what it would be but Mimmo went over to join the chat and confirm… medusa! I still got in, at which point the lifeguard decided the Medusa should be ‘Libero’, which means FREE…… Er ok!! I throughly enjoyed the swim at this beach (the post swim beer might have helped). Defo one for a repeat visit.

After a small recognisance mission to Redinoce, where the water wasn’t up to our high standard ;), we headed back to Fenicia, which is pretty much on our door step. We felt a bit silly only going here on day 5 as it was so lovely, so much so we spent the day here and didn’t even make it as far as Fenicetta and Ripa Barrata which are just a short walk/swim away. 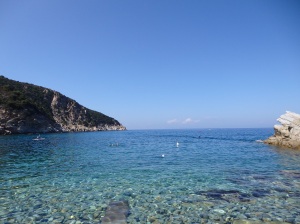 Crocetta
‘Que bellisimo’. After eyeing up this beach on a previous visit to Elba and still lusting after its magical waters this time, I finally went for a swim here. Apparently it is dangerous to get here but in reality it is more just that it is probably not suitable for small children. A no goggles swim as just floated staring all around. 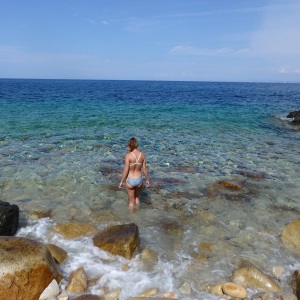 Palombaia
Back to the south of the island for a few hours on this beach but alas the seaweed clouded the water, however after 230 steps down to the beach, the water was welcomed. 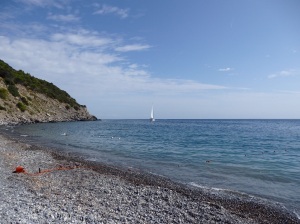 Spartaia
A speedy dip at the next beach as Mimmo reckoned it could be a contender for the best beach, however the sand led to cloudy water. Who’d have thought after years of banging on about how sand beaches are better than stone I might *just* be leaning the other way.

This is it. The last day. Do you 1) go to your favourite all day 2) ‘risk it for a biscuit’ and try some new places or 3) shout ‘oy get lost you silly thunderstorm’

Well a mixture of 1 and 3. There were a couple of places I wanted to go but sometimes you just need to chill so we spent the day at Fenicia with a beach picnic of Pizza and beer.