Sunday saw Team Mermaids in attendance at the 11th edition (we think?!) of Henley Swim’s Bridge to Bridge. This is a 14km swim in the Thames from Henley Bridge to Marlow Bridge. Brian participated in the event last year (see here). However, this year was going to be different for 2 main reasons. First, the pod format had been replaced with either solo swims (tow float required) or paced pod swims (more on that later!). Secondly the weather. Last year it was taking place the day the impact of hurricane Bertha arrived in the UK, which meant horrific weather but a compensating current. We had sunshine and clouds but a slower current!

You were given the option of registering on the Saturday at the Angel pub in Henley. Henley Swim’s love of the pub (they put on the Club to Pub as well which ends at the Angel) makes it one of the best, if not the best, swimming event companies in our eyes. So registered and a pint down we settled down for some pasta and an early night at Chez Barker in Reading. 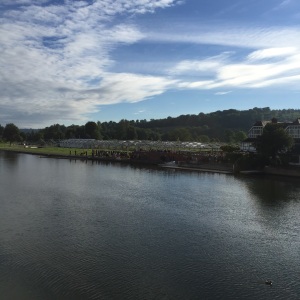 The Sunday saw a relaxed start in comparison to some of our other departure times and we got to the Leander club, where the event started, at 8am, at which point the green wave was setting off.

Soon enough the blue wave, including Kate, was gone and the pink wave, where me and Katie would be swimming had our briefing. We were both going to stick with a pacing pod for the swim. The swim isn’t a race and by surrounding yourself and sticking with other swimmers you stick to this ethos. Katie decided to swim with Pace Pod 9 (aiming for 3:45) that was paced by Simon Griffiths from H2Open magazine and I made a last minute decision to go into Dan Bullock from Swim for Tri‘s Pace Pod 10 (aiming for 3:30). 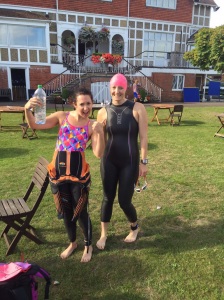 At 9am we departed. Now here at Team Mermaids we are plodders, one pace wonders, the tortoises. Call it what you want but we stick to this plan of going out at a pace we know we can maintain for the whole distance and generally it works for us. People sprinted off the start line so much so that it took me a good 15 minutes to reach a pacer to only realise it wasn’t Dan but Simon! I decided to stick to my own pacing plan even if it meant dropping down a group at the first stop.

After 4km I got to the first lock and pod 10 had just arrived… Phew! We then got in the water and waited for our kayakers. Katie appeared at this point all chipper and suggesting she might come into my pod. The pace for the first section had been pretty rapid. I didn’t want to sound negative so just said a casual ‘ok’ rather than screaming ‘DON’T DO IT TO YOURSELF’ in her face. She then asked how long we had been at the lock… 10 mins by this point. Upon doing the maths and realising that we had done the first stage in 49 mins she promptly disappeared back into the comfort of Simon’s pod whilst I whispered ‘take me with you’.

After the first stop the pace settled down and a routine of haribo, gel and water became standard at each lock. There are five stages to the swim with four stops. The swim, like the Jubilee, has decreasing distances for each stage, which means after 2 stages you are half way. The final stage somewhat bucks this trend and is 2.3km. However a fellow pod 10 swimmer who had swum the event previously told me ‘it isn’t 2.3km.. It must be at least 2.7km. That church never appears’. Therefore, whereas for a lot of swimmers that final stage was mentally and physically breaking, I was surprised but happy to see the bridge appear so quickly. Admittedly I did try and get out early only to be shooed away by a man on the banks pointing me to the real finish! 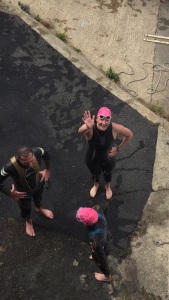 Thanks to Henley swim for putting on another great event. We both really enjoyed it. Thanks to all the people manning the feeding stations at the different locks and to the kayakers for being the silent comforting presence they are. Thanks to Simon for pacing Katie and I think, thanks to Dan for pacing me….

Additionally, a special thanks to the Barkers for letting us stay over again so we didn’t have to get up at a silly hour to register on the Sunday morning (although I am not happy about MY room having no bed now!!) and to Dennis for driving us around.