In 2011 Katie and I participated in the SLSC 1 mile race where we got beaten badly. Our egos were so badly bruised we haven’t made it back to an SLSC race since, despite me claiming that I will do the weekly Sunday races every year but never have. This year the 1 mile race was being held on a Friday and both Katie and I were available and headed on down.

They held a kids’ race and then a half mile race prior to the 1 mile. One of the kids was a child after our own hearts as she did our favourite stroke, the not yet officially recognised, “kick-on-the-back”. Note: WHEN this becomes an Olympic sport me and Katie have got the 1, 2 locked down.

The mile race starts half way down the pool and then once you get to the other end it is 17 lengths from there as the lido is 100 yards long. Katie got in and immediately declared “ooh this is cold without my wetsuit”. Now if there was a top 10 of things you shouldn’t say around people who swim in skins all year round in a non-heated lido, then that must be in the top 3. The only thing she might have said that would have been worse is “just going to have a little wee to warm this water up for you all”. 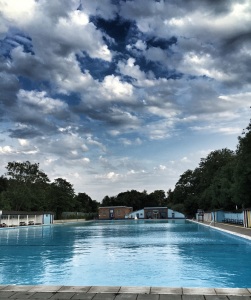 Off we swam. Despite the back and forth nature, no collisions were experienced and everyone looked out for each other. I managed a respectful 24:50, which is actually a 40 second improvement since 2011 and Katie came in shortly after me. The ladies winner was the lady who beat us last time, whilst then heavily pregnant! Well done Nancy.

I had a celebratory cupcake (thanks Katie) and headed to bed for an early night as we were back at the lido for 6am the next morning for a 7000 yd swim.