One of our friends, Lisa, did 2 pool crawls in 2 weeks… Exhausting! Here is how she did..

P.s Check out Lisa’s blog here where she is blogging about her solo channel swim coming up September 2015

Unfortunately I haven’t been able to join the rest of the group on the last few ‘Pool Crawl’s’ so decided to organise two of my own, firstly because I needed to try and catch up a little on the challenge (due to injury I wasn’t able to swim for 4 months) and also I am swimming the channel in September and wanted to start addIng a bit of distance to my training but wanted a fun way to start introducing it.

On Saturday 14th Brian and another friend Kerry joined me the pool crawl included:

The first pool of the day is a beautiful building from the outside and houses a small pool for kids and then a larger pool for those that wish to swim further. There was a small car park out the back which is easy to miss if you didn’t know it was there. It was pretty quiet in the larger pool when we got there and we only had to share the lane with one other person, who although she was slower than us was generally pretty good at stopping and letting us by – something that you don’t find much in pools.

This pool used to be an old favourite of mine and one I have swam with Brian over many winter weekends. I love being able to swim outside but in the warmth of a heated pool and I really enjoy their outdoor showers. It is a shame though that it seems to get more and more crowded every time I go and so much so that there was no room in the changing rooms to get changed – we braved it in the outdoor changing cubicles. They have however now added floodlights which means they can open later so worth a visit in the evenings.

Like many of London’s pools this is a very grand building however, it is very well known for it’s boxing and is one of Britain’s best known boxing venues. The pool again had a smaller pool for the little ones and a larger pool for us older types. Again it was pretty quiet which meant we could get our 1km done swiftly.

Before finishing the last km of the day we stopped at the local Nando’s to refuel on Chicken and Manda who was in the area dropped by to join us before we headed off to finish the last km at Mile End.

The last pool of the day, and although we had only swam 3km it is pretty tiring getting changed in between pools and the travelling. There were a few lanes in and even though one was being taken up for lessons there was a fast and slow lane out for us to jump in. There was a young girl – possibly in her younger teens who was slowly making her way up and down the lane with very wide legged breaststroke and head up crawl. I guess everyone has a different view on fast and great to see a youngster on her own putting in a few lengths – being kicked a few times in the side was reminding the team of what lays ahead of them for the summer of open water swimming ahead.

On Saturday 21st Brian wasn’t able to join us as he was camping out at London Fields to train for his 24 hour swim coming up in May – 1 mile to swim on the hour every 24 hours and Manda & Paul were busy doing something called running down on the coast. So Kerry and I headed off on the great London transport network to try a Pool Crawl of most central London locations using only walking and the tube network. The 5 pools we had planned for the day were:

This pool is just a 10/15 minute walk from Kings Cross and as we arrived outside of it we were reminded of a young lad that was stabbed whilst cycling past the leisure centre just a few weeks ago – the outside of the centre had about 20metres of flowers and photo of the young lad and reminded me of the importance to get young people into sport and be active at young age and keep them off the streets and out of trouble. As we entered the pool there was only one double lane available for public swimming as a swimming club was taking up the rest of the pool. It was an interesting 1km as we avoided two children having lessons, 5 teenagers jumping into the pool to save a dummy from the bottom of the pool as part of their life guarding course and two people transporting themselves up and down each length – I can’t describe what they were doing as swimming.

Just a 15 minute walk from Cally pool and right at the back of Kings Cross & St Pancras train station. It sits under a library and the council offices and was very quiet when we arrived with only two people in the whole pool. We took the lane closest to the furthest wall as they had a pretty glittery purple wall that we could look at and above this lane the ceiling was much higher with lots of light coming in from outside. A really pleasant quiet swim – not something that happens much.

A quick pop on the tube to Oxford Street and just behind Carnaby Street is a hidden gem. The pool, like many that we have visited recently has these quirky little wooden booths that the reception is housed in. The changing rooms were clean and modern but once in the pool the uniqueness of the pool is that the floor and side of the pool are made of marble, it also has statues at the end of the shallow end. It was again quiet when we swam and we shared the lane with just one other person to begin with – although as we got out a few others had joined.

This pool is again another one of London’s old pools which has retained many of its period features which I love. We arrived at a time that we would be able to swim in both the 25m and 30m pool. Both pools were quiet and again we only had to share the 30m pool lane with one other person and the 25m pool didn’t have lane ropes in so we just swam side by side up and down the pool. This pool was nice and light but very cloudy from the children’s swimming lessons in the morning.

To finish the day off before heading to watch the rugby we popped into the The Porchester for a lovely pub lunch. 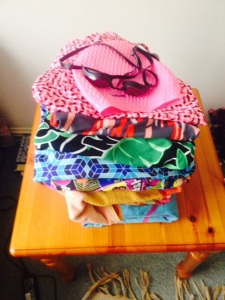