We’ve done a fair few SwimTreks between us… 8 in total.  There are 6 detailed below.  The final 2 we are waiting on Suz for… we could be in for a long wait.  So until then enjoy the below.

This was the first SwimTrek that Kate and I went on together. About four years before, my mum had read an article about SwimTrek and thought it would be something we would both love.

We flew over to Split and stayed a night there wandering round the old town and enjoying the café culture. The next morning we got a bus and a boat over to the tiny island of Prvic – our base for the holiday. The island is so small no cars are allowed on it! 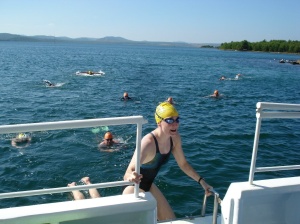 We were staying in a lovely hotel right near the harbour and that night we met our group over dinner. I know it is clichéd but it was our lovely group who made the holiday. We had the very sweet Pauline and Colin from London who we still bump into a couple of times a year at swims, the crazy Germans, Manfred and Klaus, with the questionable taste in speedos (blue tie-dye), KP an American living in Oman who could swim for miles and our fantastic guides Tina and Andy. Tina is from Cornwall and we met up with her again when we went down to the Festival of Sport. Andy was a super laid back Australian. After impressing on us the importance of being on time Andy habitually turned up 5 – 10 mins late. We called this ‘Andy time’. 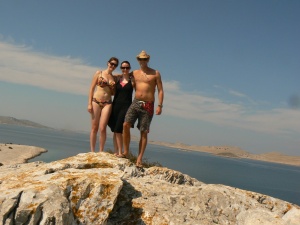 The swims in the sea around Croatia were lovely. We typically did a 2-3k swim in the morning crossing between islands and then a 1 – 2k costal swim in the afternoons. It was not the most intense SwimTrek I have been on distance wise, but there was just me and another guy Dave in the fast group and we kept up a pretty rapid pace, which made it tougher and more enjoyable.

This was a fantastic first experience of swimming holidays

Manda‘s first and only (so far) SwimTrek with Katie, Kate and Suz, Greece 2011

In 2011 we headed off to the Cyclades islands in Greece for a SwimTrek.  We met up at Gatwick and flew to Athens before getting a connecting flight (in a very small plane!) to Naxos. 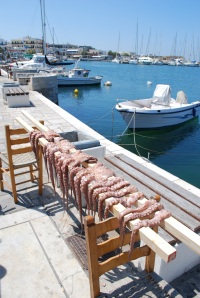 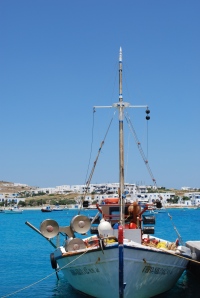 We sampled the local food and drink that night and then the following day we boarded our ferry to Koufonissi.  It was on the ferry that we started meeting the other people taking part in this week’s SwimTrek .  It soon became apparent that it was an all-female trip, with all the other ladies being from Australia..  2 people were happy about this.. Aki-mou, our Greek captain and Andy, our guide.  The other guide for the trip was Trish and this was going to be her first (of many) SwimTrek s. 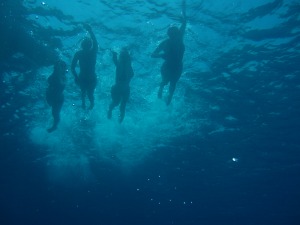 Day 1 involved a test swim to put us into groups (which would inform the all-important decision of which colour swimming cap we would be obliged to don for the rest of the trip). With all the other swimtrekkers being from Australia, a country synonymous with swimming success, there was concern in the Brit pack that we were going to struggle to keep up with them.  We needn’t have feared as the Brits showed the Aussies how it was done 😉  In the afternoon we went for a swim along the coast and after getting back on board the boat, where Kate hugged me and Katie warm, we proceeded to watch Suz decide that she hadn’t swum as far as us and not wanting to miss out, swam away from her group.  Kids, please do not do this!! 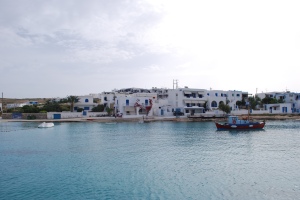 Over the following days Andy applied copious amounts of Vaseline to everyone.  None of us can remember whether Andy was eager to do it or if lots of the women were eager for him to lather them up.  Note:  the seasonal professionals, the Brits, used Bodyglide.  We did various crossings and coastal swims around the Cyclades and moved to another island called Schinoussa.  The beauty of the surroundings never failed to amaze you.

Highlights of the week were getting to know the mermaids, the clear blue sea and swimming a lot further than I ever had….repeatedly. 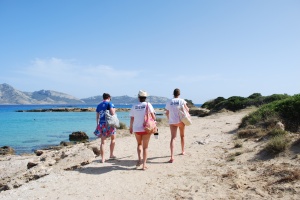 Low-lights were a lack of food on the boat and me putting my hand in a patch of sea urchins.  Additionally, my childhood fear of all things that sting (after multiple stingings from weaver fish) got the better of me on one of the days, so I got out mid swim after seeing lots of jellyfish.

There are some other highlights involving alcohol, nudity, locals, mobile phones, sea urchins and scissors.. but what happens on SwimTrek  stays on SwimTrek .

In 2011, Katie and I decided that one Swimtrek that year just wasn’t enough, so in October we did the trip to Kas in Turkey.  My and Katie’s experience of this holiday were very different.  I had an excellent time, thoroughly enjoying the beautiful blue seas, the delicious Turkish food and sunbathing on the very comfortable gulet that transported us from swim to swim.  The highlight from a swimming perspective was when we sailed out to Greek waters and then swam back to Turkish waters, so we can now say that we have swum from Greece to Turkey.  The other guests on our trip were really fun too, so I also experienced relaxing evenings, drinking beer on our balconies and a hilarious drunken last night out.  This was the trip where we met the lovely Dave who has since become a firm swimming friend.

Poor Katie, on the other hand, was felled early on by a nasty stomach bug, which kept her bedridden for pretty much the entire trip.  Bad times.  I think this explains why Katie has never been on another Swimtrek trip since… 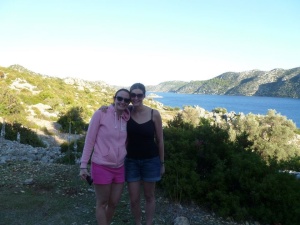 Having loved our SwimTrek trips to Croatia in 2010, and Greece and Turkey in 2011, I was desperate to do another one in 2012.  However, unfortunately none of my fellow mermaids would agree to come with me.  To be fair, that was probably because we were going to New York in August of that year to swim round Manhattan…  As a result of this poor commitment from the mermaids, I had to rope in someone else to accompany me.  Cue David Hook, who Katie and I met on our Turkey SwimTrek, who is pretty easy to bully so kindly agreed to come with me. 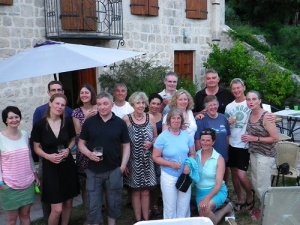 Montenegro was absolutely stunning, especially Perast, which was our base for the trip.  It sits on the beautiful Bay of Kotor, nestled amongst mountains.  The scenery was great and Dave and I got on very well with our fellow Swimtrekkers, six of whom were women in their 50s/60s who had all met on another SwimTrek  trip.  I think that is one of the nice things about SwimTrek– everyone comes back again and again and makes really good friends.  It’s always a random bunch as well and you’ll probably meet people who wouldn’t ordinarily cross your path in your day to day life.  I found my soul mate in a 50 something year old Australian gay maths teacher who lived in China, who I felt was my best mate by the end of the trip. 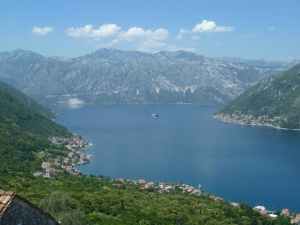 There were two downsides with this trip as far as I was concerned.  The first was the water temperature.  Some of the swims were actually uncomfortably warm, although this may have had something to do with the heat wave they were having.  The second and most important problem was the lack of food on the boat…  I don’t know what the guides were thinking, but on some days we set off with NO CARBS for lunch.  I’m not sure how anyone is expected to swim 3k after a lunch of meat and salad.  Crazy stuff.

All in all a brilliant week though.

In April 2008 I (Brian) went to the British Virgin Islands on my first swimtrek holiday.  Basecamp for the week was the Leverick Bay Resort on Virgin Gorda.  Just getting to the hotel was an adventure: flights from Gatwick via Antigua and Saint Maarten to Beef Island, followed by an overnight stay in road town, then a ferry and a taxi.  Luckily I met a couple of other swimtrek’ers when I landed at Beef Island (Claire and Jane from Jersey), so we were able to share taxis and the ferry for the last part of the journey.

There were 14 of us on the trip, along with two guides (Lizzie and Simon).  We averaged between 3 and 4 hours of swimming a day, swimming along a linear archipelago of islands.  Each morning we would take the boat to the point where we stopped the previous evening, so there was a real sense of progression through the islands.  Highlights included swimming past Necker Island (Richard Branson’s private island), and swimming the channel between the British and US virgin islands (but not being allowed to land on the beach as we didn’t have our passports with us). 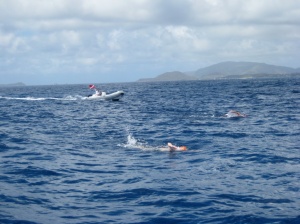 Water temperature was a very nice 28C, so cold was not an issue. Most of us wore rash vests to avoid problems with sunburn, but we all ended up with hat and goggle tan lines by the end of the week 🙂

I July 2010 I (Brian) went to the Maddalena Archipelago on the northern coast of Sardinia.  All of the swims were within the Maddalena national park, and were in crystal clear waters.  Compared to the British Virgin Islands there was a lot more sealife to look at as we were swimming (lots of small fish, and some dolphins following the boat).  In total we swum about 26km spread over 6 days.  Typically we did two swims a day, with a mix of coastal swims and crossings.

Our guides for the week were Francesco Cavaliere and Borut Strel. Francesco is the only person to have swum the entire coastlines of all 44 Italian Islands. Borut is the son of “big river man” Martin Strel, managed all of his big swims, and since founded Strel swimming holidays.

Water temperature was about 25C, so no need for wetsuits, although again most of us wore rash vests to minimise risks of sunburn.

The end of the holiday was slightly ruined by flight cancellations. Some guests and one of the guides were stranded in Olbia for 24 hours, although swimtrek could not be blamed for that 🙂