One of my favourite memories of university is training and racing the bi-annual Oxbridge Channel Swim relay. I competed in the race in 2000 and in 2002. The swim follows standard channel swim rules. 6 swimmers (three girls and three boys in our case) swimming one hour each on rotation until you get to France. The one difference is that this is no ordinary channel crossing this is a race…Oxford vs. Cambridge! Just like the boat race but with much less TV coverage.

Unfortunately in both of the races I swam in we (Cambridge) lost to Oxford (sob sob). However on the plus side our time from the 2000 crossing of 8h 25 m remains an Cambridge record.

Anyway enough of this reminiscing and on to the point of this blog. The Poseidon Club was founded to celebrate the channel swim and to raise funds for future swims. The club is organised fantastically and enthusiastically organised by Nick Thomas an Oxford alum (the club really wouldn’t exist without him).

Each year the club holds a dinner at the at the Oxford and Cambridge Club and Nick presents a trophy for the best team effort of the year. In 2012 we were up for the award for our Manhattan adventure. We were up against a chap would had cycled across the the US and a lady who had qualified for Kona. Suz gave a fantastic speech featuring the East River monster which was found just a couple of weeks before we flew out washed up on the river bank. I think it was Suz’s speech that did it and somehow we won the Poseidon trophy! 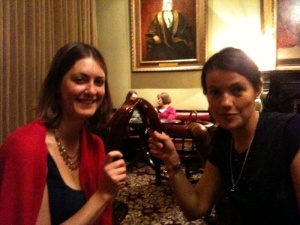 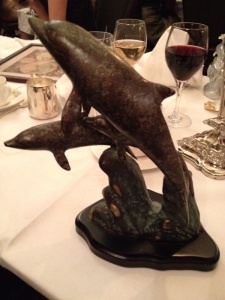